“Even when you triple check the rules, you could be refused boarding – it was super stressful and cost me a ton of money. But thank goodness for humanity.”

Henry and his wife Aaliyah had just wrapped up an amazing honeymoon to Puerto Vallarta, Mexico, when a minor mistake cost them hundreds of dollars and loads of stress.

Don’t let it happen to you.

Henry was trying to fly back to the United States with his wife, Aaliyah. The trip had been wonderful – sandy beaches, exquisite international cuisine, friendly locals, and the best hotel in PV. They’d woken up early for one last swim in the ocean, before checking out and hopping in an Uber to the airport. It seemed a stress-free end to the perfect honeymoon.

Until they tried to board the plane.

He says that he, and about 30 other passengers, were not allowed to board the plane.

Why? Because of a simple mistake that could happen to anyone – they had received the wrong type COVID-19 test that they needed to re-enter the United States.

The United States, like many other countries, requires passengers to present a recent negative COVID-19 test result before boarding a plane bound for the country. Simple, right?

Henry thought the test they received from a local pharmacy in Puerto Vallarta was all they needed. The test was in a nice-looking clinic, the doctors were friendly, and he had the same ticklish nostril swabbing experience he had when he got tested for work a few months ago. They each received a piece of paper saying they were COVID-free, so he naturally assumed everything was fine.

Plus, the tests had been expensive. A total of $240 USD. “That’s nearly enough for another night in the hotel!” he thought to himself as he pulled out his Mastercard. “But it’s a small price to pay for safety”, he consoled himself. At $240, he was confident he had made the right choice for his family.

Turns out he was wrong.

The tests they received were authorized for personal use only – they were not CDC-approved for travel. As far as the airline was concerned, their tests were worthless.

Humiliated, Henry and his equally embarrassed wife withdrew from the line at the airport. “Oh my God, Henry”, she said. “We’re stranded. What are we going to do?”

This marriage was not getting off to a good start.

Determined to get home, Henry reached out to the logical first point of contact – the clinic that had administered the test. Surely there’d been a mistake.

Much to his chagrin, there was no English-speaking employee who could help him. He used what little broken tourist Spanish he knew – “habla ingles, por favor?” The answer was a regretful-sounding “No”.

Desperate, humiliated, and stranded, he was running out of options.

Aaliyah, sensing her new husband wasn’t quite as on top of everything as she’d hoped when she married him, took to Google for answers. The answers weren’t what they’d hoped – they needed to get one of only two CDC-approved tests if they were going to be allowed home, even though they were both fully vaccinated and felt fine.

The first option was a Molecular PCR – it would cost just as much as they’d already paid for their non-approved tests, and would require 24-72 hours for the local lab to return results. “Even if we could afford $500 for tests, we can’t afford another 3 days in a hotel while we wait”, Aaliyah dispaired.

Option #2 was a Rapid Antigen test. Not quite as sensitive as the lab PCR test, it was still very reliable and, more importantly, CDC-approved to get them back to the US. She felt a little better, but still had another problem – they’d already been duped by what they thought was a legitimate lab, and didn’t speak enough Spanish to ask a new lab if their tests were approved. So they were still stuck – they knew what they wanted, but not how to get it.

“I just want to be back in the Bay!” Aaliyah cried as she slumped into a nearby chair. “This is my worst nightmare.”

It was Henry’s worst nightmare too, as he watched his wife begin to sob in the airport.

To his surprise, Henry saw two men walking over to him. They were obviously tourists and looked like he may have seen them both out on the town in Puerto Vallarta.

“Hi there! Did I hear you say Bay? Are you two from California too?”

Henry couldn’t possibly imagine what they wanted from him, but he was desperate for help. “Yeah, we are. But we probably won’t be back for a while – we’re in trouble.”

The two men listened as Henry explained everything – the $240 tests, getting rejected at the gate, their botched honeymoon, everything. He was shocked when he heard one of the men reply – “No problem, we have just the thing!”

He pulled out 2 COVID tests, saying “we were concerned about that happening to us, so we bought these RapidReturn kits before we left. We bought extras for another couple we were planning to travel with, but they got cold feet. So you may as well have them.”

“It’s really easy!” the other man interjected. “Just scan the QR code on the kit. You’ll be linked with a testing specialist who walks you through the test in real-time. If you can work a video chat and Q-tip, you can do it. Everything you need is in the kit. It takes like 20 minutes, and we both got our results emailed and texted to us in under 15 minutes.”

Even Aaliyah was listening, and a look of relief slowly spread across her face.

“Please, take them! We’re already cleared for boarding and won’t need them,” the first man said.

Henry could have kissed them both, he was so relieved. Overcome with gratitude, he opened his wallet.

“Oh, don’t even think about it! They were cheap. A lot less than what you paid for those tests that don’t even get you home!” the first man replied with a laugh.

Relieved, Henry gave them his business card, “I owe you guys dinner when we get home.”

“Then hurry up and take those tests! You can still make the flight. We’re off to the bar for a farewell cocktail.”

And with that, the two men were gone. Henry and Aaliyah looked at each other. “Talk about lucky!” she said.

Henry and Aaliyah each scanned the tests on their QR codes. Sure enough, they met with a friendly testing specialist who walked them through the test. While it was a little embarrassing to have to swab their noses in the airport, the test was exactly as their mysterious saviors had described it- a quick swab, wait for the solution in the kit to work its magic, then check the lines on the test. They showed the test strip to their specialist over webcam, and that was it.

A few minutes later, their phones dinged – a text message with the results. They were almost home!

Ecstatic, they rushed to the gate. They could still make it!

They showed their results to the same ticketing agent who had turned them away just half an hour earlier.

She was surprised, to say the least.

But not nearly as surprised as Henry and Aaliyah were when they made that last boarding call.

For more information on the vacation-saving RapidReturn Kit, click here

👉 Use the code FREESHIP100 at checkout for free regular shipping on your RapidReturn test kits.

In case you were wondering, Henry and Aaliyah made good on their promise to take the two helpful strangers out for dinner. 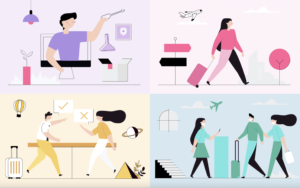 This website uses cookies to improve your experience while you navigate through the website. Out of these, the cookies that are categorized as necessary are stored on your browser as they are essential for the working of basic functionalities of the website. We also use third-party cookies that help us analyze and understand how you use this website. These cookies will be stored in your browser only with your consent. You also have the option to opt-out of these cookies. But opting out of some of these cookies may affect your browsing experience.
Necessary Always Enabled
Necessary cookies are absolutely essential for the website to function properly. These cookies ensure basic functionalities and security features of the website, anonymously.
Functional
Functional cookies help to perform certain functionalities like sharing the content of the website on social media platforms, collect feedbacks, and other third-party features.
Performance
Performance cookies are used to understand and analyze the key performance indexes of the website which helps in delivering a better user experience for the visitors.
Analytics
Analytical cookies are used to understand how visitors interact with the website. These cookies help provide information on metrics the number of visitors, bounce rate, traffic source, etc.
Advertisement
Advertisement cookies are used to provide visitors with relevant ads and marketing campaigns. These cookies track visitors across websites and collect information to provide customized ads.
Others
Other uncategorized cookies are those that are being analyzed and have not been classified into a category as yet.
SAVE & ACCEPT

Fill out the form below to get added to our Primary Care waitlist.